A New Floor in the Sun Room

PNC volunteers diligently work to install a new tile floor in the Sun Room classroom.  The new flooring is part of the school's effort to reduce allergens by replacing the carpet.    ​Thank you to our friends at PNC Bank! 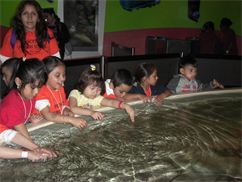 And so the 46 three- and four-year old PNS students did--thanks to our sponsor, PNC Bank.  At Adventure Aquarium in Camden, NJ, the children had a full day of learning about marine life and seeing marine habitats first hand.  In addition to sponsoring the event for the PNS children, PNC Bank sent four of its staff members, led by Patricia Kane Corporate Event Manager, to serve as volunteers on the trip.  Ms. Kane explains, “PNC Bank recognizes the importance of early childhood education and we work to support underserved populations to realize their full potential.”  Our thanks to our friends at PNC Bank for making this possible!! 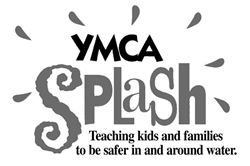 During the first week of spring, while winter was trying to keep its grip on us, the children of Princeton Nursery School were invited to enjoy a week of swimming--three days at the Princeton Theological Seminary Pool and the last day at the Princeton YMCA Pool.

Paul Zeger, the aquatic instructor at the YMCA taught the children water and boat safety through a combination of water activities, stories and films.  Activities were wrapped up on Friday with a presentation of certificates and badges to all the children attending.

We'd like to thank the Princeton YMCA, Princeton Theological Seminary and Johnson & Johnson for making this event possible.

In support of Rotary’s commitment to literacy and in recognition of the month of March as Rotary Literacy Month, the Rotary Club of Princeton has initiated a new Literacy Project with the Princeton Nursery School.

Throughout the month of March, members of the Rotary Club, including some spouses, read to children ages two and a half to five at the Princeton Nursery School. The teachers at the school chose the books for the Rotarians to read from among the children’s favorite titles.

The Rotary Club plans to support this project as part of its on-going commitment to literacy. 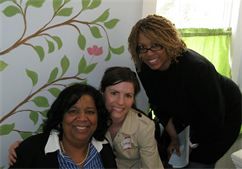 Members of the Junior League of Greater Princeton treated friends and family of Princeton Nursery School to delicious tea and treats as we celebrated the unveiling of our beautiful new mural.  Members of the JLGP worked several months on the project.  The team worked in shifts during the week and on week-ends in order to adhere to their strict time schedule.  The JLGP also worked on two additional literacy projects in conjunction with PNS students and teachers--the creation of an English/ Spanish Word Book and a scrap book for each student.  Our thanks to Minda Alena and Katie Rosenthal, who chaired the project, and to the entire JLGP team for this beautiful addition to our school.